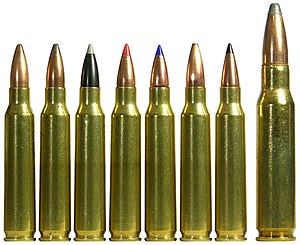 A variety of .223 Remington cartridges with a .308 Winchester (right) for comparison

The question of legality of the calibre .223 rifle for hunting of wild deer or for purposes of the HCAP Range Test crops up regularly and recent correspondence received by Deer Alliance HCAP suggests that the .223 has been approved for use by the NPWS as meeting requirements.

The Regulations governing this, S.I. No. 239/1977 (Wildlife Act, 1976 (Firearms and Ammunition) Regulations, 1977) specifies that you can only use a centre-fire rifle of not less than .22 calibre with a muzzle energy of not less than 1700 foot-pounds to hunt deer species and such rifles must use bullets weighing not less than 55 grains.

Leaving aside for the moment the question of minimum legal versus minimum recommended calibre, it would appear that the .223 does not meet the muzzle energy (ME) requirement of “not less than 1700 foot-pounds”.

An analysis of the different ammunition manufacturers’ published ballistics show that no .223 ammunition in the range 55 grains and upwards meets the minimum requirement of 1700 foot-pounds of energy at the muzzle.

It is apparent from this cross-section of manufacturers and their associated published ballistics information, that the .223 calibre does not meet the legal requirement of 1700 foot-pound ME  in any bullet weight from 55-grain to 77-grain.

Having regard for the foregoing, it is clear that the .223 calibre rifle should not be approved by NPWS WLU in relation to issue of a deer hunting licence based on use of this calibre and will not be accepted as a deer-legal calibre by Deer Alliance HCAP for purposes of the HCAP Range Test.