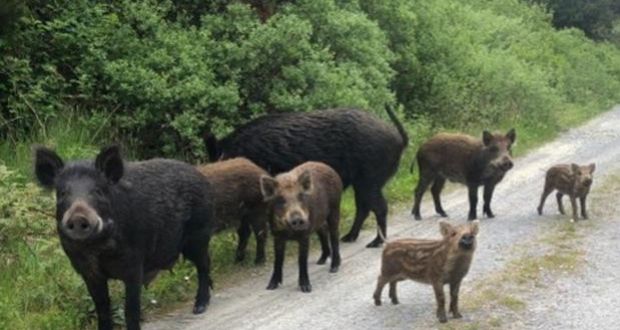 The Irish Times today 16th June 2021 carries reports of a large male boar running wild in Kerry. According to the report, six of seven of the alien species were ‘dispatched humanely’ but one remains on the loose, says wildlife service.

Members of the public in Kerry are asked to report any sightings of a large male boar running wild in the Mount Eagle area and not to approach the animal.

The National Parks and Wildlife Service (NPWS) has moved quickly to capture a number of the animals, now an alien species, after a report came in from the area on Tuesday.

However, one large male has not been located and is now running wild.

Once native to Kerry – some well-known placenames, such as Torc near Killarney as well as Muckross, trace their origins to the wild boar which fed on the acorns of the local oak woodlands– boar in the wild are now an invasive species and are brought in illegally.

It is currently an offence without a current licence to release certain species into the wild which may have serious implications for native flora and fauna, the Department of Housing and Heritage has said.

“Such releases are not only illegal, but they also pose a very serious threat to the disease-free status of the national herd. There could be dire consequences if diseases such as blue tongue or African swine flu were to be present or if these highly contagious disease were unintentionally introduced,” it said.

On Tuesday, June 15th NPWS regional staff were made aware of the presence of approximately seven animals fitting the description of feral pig/wild boar by a concerned landowner in the Castleisland area.

Six of the seven were “dispatched humanely” and they included four females and two piglets, regional manager of the NPWS in Kerry, Séamus Hassett, said on Radio Kerry on Wednesday morning. However, the male boar is still at large. Mr Hassett appealed to the public not to approach the animal but to report any sightings directly to the NPWS in Killarney National Park on 064 6635215. The NPWS was very grateful to the landowner for reporting the boar, he said.