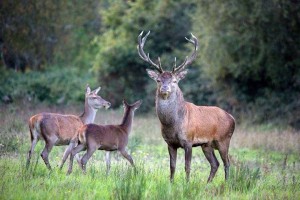 Tom Hayes T.D., Minister of State at the Department of Agriculture, Food and the Marine and Heather Humphreys T.D., Minister for Arts, Heritage and the Gaeltacht today (4 March 2015) published the report Deer Management in Ireland – A Framework for Action and also announced the membership of theDeer Management Forum.

“The Report lists a range of actions to address the whole issue of deer management across the country.  I am pleased to say that the series of stakeholder consultation exercises led to a large degree of consensus in identifying some of the key actions.”

“I would like to thank all of the stakeholders involved for the work involved in producing this final report. The production of the report was a significant challenge in attempting to balance the demands of agriculture, forestry and conservation. The development of management strategies should recognise the importance of conserving wild deer species as part of Ireland’s rich natural heritage and biodiversity, while also recognising the needs of the agricultural sector. I am happy to see that this principle is acknowledged in the report.”

The report recommends a series of actions on deer management and conservation in a number of areas including reviewing regulatory and administrative frameworks, land uses and economic interests, information, research, monitoring and economic opportunities. Other actions include the protection of native red deer, reducing the negative impacts of non-native deer species and enhancing skills and best practice.

Both Ministers have agreed to the establishment of the Irish Deer Management Forum to implement the various actions listed in the Report. The Forum itself comprises representatives from the main stakeholder areas such as landowners, forestry, hunting and conservation organisations as well as representatives from both Departments. The Ministers have appointed the members to the Forum and have also appointed Ms. Judith Annett as Chairperson of the Forum.

Arrangements are now being made to hold the first meeting of the Irish Deer Management Forum.

Membership of the Irish Deer Management Forum is made up as follows:

The document, “Deer Management in Ireland – A Framework for Action” can be accessed here: