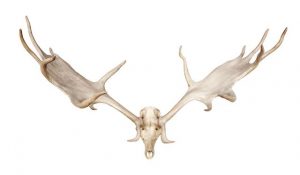 Description from the Bonham’s Catalogue: “The ‘Irish Elk’ or Giant Deer lived during the Pleistocene Period of the Great Ice Age (starting 2.6 million years ago and ending 11,700 years ago). Now extinct, the Irish Elk is one of the largest deer that has ever lived.

The Giant Deer stood around 2.1mtrs tall at the shoulders, carrying antlers weighing up to 40kg and spanning up to 3.65 mtrs. Whilst called the ‘Irish Elk’, the species is neither exclusively Irish – or even an elk but probably related to Red or Fallow deer. While the majority of the skeletons have been found in Ireland, their habitat was vast, spreading across Europe, Africa and China. The name itself stems from the fact that most of the remains have been found in the marl underlying bog of Ireland.

There are numerous theories regarding the extinction of the species – over-hunting by humans, as well as loss of habitat and vegetation due to climate change at the end of the last Ice Age are both cited as potential causes. Alternatively, it has been suggested that the antlers themselves became so large that they leached minerals and calcium from the animal’s bones, effectively causing what we know as osteoporosis”. 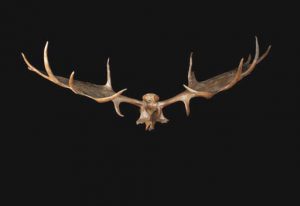