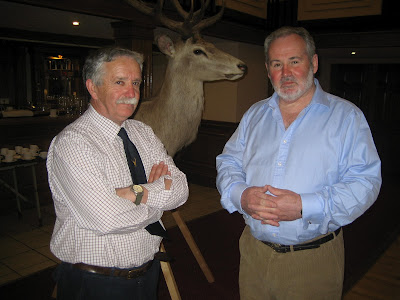 Deer Alliance HCAP is saddened to report the sudden and untimely death of Paul Wood (photographed above, left, with Liam Nolan, Deer Alliance, at a recent HCAP MCQ in Claremorris, Co. Mayo).
Paul was Deer Manager at Screebe Estate, Connemara, Co. Galway and a former senior officer-holder and Chairman of the Irish Deer Society in Connacht and nationally. He died unexpectedly but peacefully at his home on Saturday 11 August 2012.
Paul will be greatly missed by all who knew him but especially by his loving and much-loved wife Patricia and his daughters, Bel, Abby, Jody and Lauren, to whom we extend our sincerest sympathies.
A fuller tribute to Paul’s life and contribution to deer in Ireland will appear here shortly.

Funeral arrangements: Service of Rememberance at Church of Ireland, Oughterard, Co. Galway at 12 noon on Friday 17 August 2012, followed on Monday 20 August 2012 by Service of  Cremation at Mount Jerome Cemetery, Dublin at 3.30 p.m.