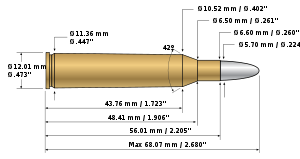 .220 Swift schematic
Arising from a recent Deer Alliance HCAP Range Test, the question arises, is the .220 Swift a suitable round for use on our Irish deer species?

The current minimum legal calibre for use on deer in Ireland is not defined by calibre but rather by bullet weight and muzzle energy. The minimum legal bullet weight is 55 grains and the minimum legal muzzle energy is 1700 foot-pounds, as provided for under Statutory Instrument No. 239 of 1977. Effectively, this is taken to mean the .22/250 which in the period 1972-1993 was probably the most widely used centre-fire round, although for many hunters, the preferred round was the 5.6 x 57 m.m.  with 74 grain bullet (typically with 1915 ft-pds ME).

However it should be noted that at the time of publication of SI 239/1977, it was established that many manufacturers of .22/250 ammunition were producing ammunition delivering less than 1700 ft-pds of ME, the average being 1637 ft-pds ME. This remains the case and in fact, most if not all .22/250 ammunition currently available in Ireland at retail level fails to meet the legal minimum requirement – which in turn means that unless applicants for a Deer Hunting Licence specifying use of the .22.250 can prove that their brand of ammunition delivers 1700 ft-pds ME, then the NPWS Wildlife Licensing Unit are entitled to reject the application for the DHL, as to grant it would lead to a breach of the Wildlife Act 1976 (as amended) and/or SI 239/1977.

Meanwhile, from 1993, larger-calibre firearms became available and accepted by the licensing authority (Garda Siochana). This came about as a result of certain legal actions in the form of judicial review in the High Court against refusal of firearms certificates for calibres above .22 inch. Thus the keener deer hunters switched over to calibres such as the .243, .270, 6.5 x 55 m.m. and .308, while newcomers to deer hunting automatically went for the larger calibres.

Nevertheless, there remains a hardened corps of hunters who still use the .22/250 and in a few cases, the 5.6 x 57 m.m. This is despite the fact that unanimously, the various deer organisations, and especially Deer Alliance HCAP, are committed to the promotion and use of .240 inch, 100-grain bullet with muzzle energy of 2100 foot-pounds as the recommended minimum legal calibre for our Irish deer species.

For purposes of the Range Test element of HCAP, candidates must use the legal minimum calibre (not necessarily the minimum recommended legal, which is a different calibre). For a small handful of candidates, this has meant the .22/250. More recently, one candidate presented with a rifle in calibre .220 Swift, with 60 grain bullet. While the standard .220 Swift with 40- or 50-grain bullet  does not meet the minimum legal calibre requirement, the same calibre with 60 grain bullet does, since in Winchester 60 grain, it delivers 1772 foot-pounds (2403 Joules) of energy at muzzle.

Thus Deer Alliance HCAP are satisfied that the .220 Swift with 60-grain bullet may be used for purposes of the HCAP Range Test, while strongly advocating that the minimum legal calibre should be .240 inches, with 100-grain bullet and muzzle energy of 2100 foot-pounds, for all purposes relating to the humane and effective management of wild deer. HCAP Range Test Candidates wishing to use the .22/250 with 55 grain bullet must prove that their chosen ammunition also meets the legal minimum requirement of 1700 ft-pds ME.