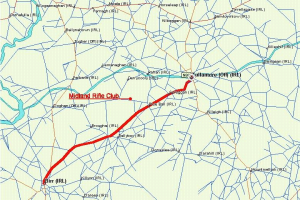 6: All Candidates are required to sign in at the main MRC check-in desk on arrival at the Range, and before proceeding to the Windmill Range on which the HCAP Range Tests take place, and to exhibit evidence of identity, insurance and firearm certificate on request. No insurance, no Range Test; no Firearms Certificate, no Range Test.

a) All Candidates will be listed alphabetically (surname first) and allocated to firing details accordingly.
b) Each Firing Detail usually has up to 20 positions (up to 20 Candidates to each Detail).
c) The first Firing Detail will always kick off at 10 a.m. sharp, with approximately 45 minutes allowed for each Detail.
d) All Candidates are urged to arrive at MRC not later than 9.30 a.m. on the day of any Range Test, to allow time for registration procedures as set out above.
e) Thereafter, HCAP Range Officials will allocate positions on each Detail according to alphabetical order and actual presence on the Range.
f) Deferrals must be notified in writing (email or text message) to the Deer Alliance not less than 3 days before any Range Test. “No-shows”, i.e. non-attendance without notification, may result in loss of entitlement to complete the HCAP Certification programme.
g) The Range Test consists of accurate grouping of three shots in a four-inch circle at a distance of 100 metres, taken in the prone position; followed by accurate placement of nine shots in the heart/lung area of a life-size deer target (three shots prone or sitting at 100 metres, three shots sitting or kneeling at sixty metres and three shots standing at 40 metres). Normal stalking aids may be used e.g. slings, bipods/tripods or stalking sticks. Candidates are permitted two attempts at the grouping target followed by one attempt at the deer target or one attempt at the grouping target and two attempts at the deer target.
h) After shooting, each Candidate, pass or fail, is given a slip with his or her name on it and indicating pass or fail, and attempts taken. This slip (pass or fail) must be presented to the HCAP Administrator Liam Nolan before leaving the Range in order to receive the HCAP Certificate
i) Repeats on the day of the Range Test are entirely at the discretion of the designated HCAP Range Officials and may be subject to a Repeat Fee of €25.00
j) Safety is paramount at all times and any lapse will be severely penalised. All Candidates are issued with the Deer Alliance “Safe Stalking” safety leaflet and. copies will be available at each Range Test. It is the responsibility of each Candidate to ensure that best practice safety procedures are followed at all times.