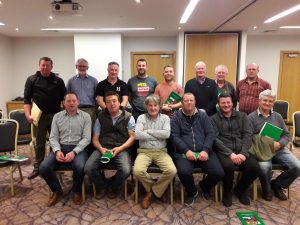 Deer Alliance HCAP were pleased to run a closed HCAP Training Workshop and MCQ in Portlaoise on Saturday 12th May 2018 for members of the Irish Farmers’ Association and IFA Countryside at the request of IFA Farm Business Skillnet, who subsidised candidates as part of the IFA’s ongoing commitment to training for members. Farm Business Skillnet is the training division of IFA, providing training and up-skilling to both the IFA volunteer structure and to groups of IFA members.

Coming in the wake of a similar event organised at the request of National Parks & Wildlife Service for NPWS Field Staff (Conservation Rangers and District Managers) earlier this year, Deer Alliance were pleased to receive this further endorsement of the Hunter Competence Assessment Programme (HCAP).

HCAP is now in its fifteenth year of operation and has processed over 2700 licensed hunters since commencement of assessments and certification.

The next HCAP MCQ will take place in June 2018, date to be announced here shortly, with supporting Range Test in July 2018.